Padrón peppers are a traditional Spanish tapa which is not only fun and tasty but it’s now also supper easy to cook at home thanks to the AirFryer.

Padrón peppers get their name from the municipality where they were originally first grown in northwestern Spain. They are small green peppers with one very curious singularity which is part why they are so popular as they are sure to be the cause of a lot of laughs while you eat them with your friends.

The thing is most Padrón peppers have a mild taste, however there is a minority (10%-15%) which are really really hot, and there is no way to tell which ones are mild and which ones are hot until you eat them. It’s kind of a Russian roulette sort of situation, and it can be a lot of fun!

Padrón peppers are fried in olive oil and served with coarse salt over them, which make them a great candidate to become an AirFryer favorite.

Here is how you cook your Padrón peppers. AirFryer Recipe

For this recipe the main difference between the traditional way of cooking the Padrón peppers and cooking them with the AirFryer is that the hot air will dry them from the outside, this is why it is recommended to spry a little bit of extra oil over your peppers when you stir them, to ensure they remain hydrated and tender.

If you don’t have time to research every airfryer on the market the Philips AirFryer HD9240/94 is by far your best choice. It has won the best Airfryer of the year award for 6 years in a row now! 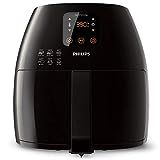